Powered by ZigaForm version 4.2
CORONAVIRUS ADVICE FOR CARERS, ELDERLY AND THEIR FAMILIES
BLOG
You are here: Home / BLOG / Health & Care News / The forthcoming Green Paper – would it solve all social care pro... 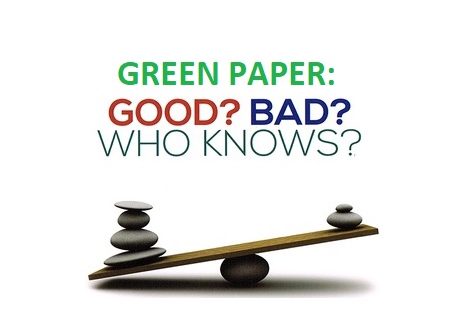 The forthcoming Green Paper is a long-awaited document where the way of funding social care is supposed to be clarified, once and for all.
In practice, it is a consultation document, which basically means that once it’s finally issued, further clarification and a response is needed, before it is in fact implemented. It may take a significant amount of time until the completed document is finally in force.

The publication of the Green Paper has been delayed several times – to date the scheduled publication date has been missed five times.
Originally, it was due to be published “in summer 2017”, then it was delayed to the “end of 2017”, the next publication was aimed for “autumn 2018”, then it was supposed to be “the end of 2018”.

After failing to publish the document “by April 2019”, the Government stated that the publication will occur “at the earliest opportunity”, which basically means in the indefinite future.

According to media reports, the most recent delays are caused by the Government concentrating on Brexit. On top of that, there is a lack of clarity in the proposals and ideas included in the Green Paper, therefore it’s no wonder the document has been further delayed.

While the NHS services are in majority free (excluding for example dentistry and some prescriptions), this is not the case for social care. We may not even realise until we or our relatives or friends actually need social care.

A so-called means-test is applied to determine if someone requiring social care support is eligible for social authority funding support.
If you have capital below £23,250, you are eligible for local authority funding support, but even then they have to contribute your income (and some of the capital, if it exceeds £14 250) towards the cost on an ongoing basis.
For any home care arrangements (live-in care, domicilary care), local authorities may establish their own frameworks for charging (if they decide to charge). In this case, the value of the person’s home is always excluded from the care means-test.

What will/should be included in the Green Paper?

The several times postponed Green Paper is still a mystery and its final shape and form are yet to be revealed. But the number of policy ideas have reportedly been under consideration for inclusion in the document. We went through some topics that might or at least should be included in the Green Paper.

The amount of £23,350 has remained unchanged since April 2010, but there were many suggestions that the means-test should be significantly more generous, even upwards of £100,000.
Is the current means-test fair? Well, the discretional character of charging by the Local Authorities sometimes seems to be questionable. Additionally, the current amount of £23,250 should be explored further, whether it should or should not be increased? Is the current/proposed amount fair? And so on.

In general, people in the UK spend way too much money on their social care. Therefore, it has been recommended that a cap on the lifetime social care charges should be defined, so people don’t spend countless amounts of money.
The initially proposed maximum amount to be spent by an individual on their social care was £72,000. This cap was supposed to be brought into force in April 2016, but then it was deferred until April 2020. In the meantime, in December 2017, the Government said that the April 2020 cap implementation would not occur either and no new date was stated, meaning so far, no maximum amount that an individual should spend on their social care practically exist.
Furthermore, there was a reported disagreement between the Prime Minister and the Health and Social Care Secretary: Mr. Hancock, who had warned Theresa May that the care cap will cost billions and lead to significant tax rises.

Still, nothing happened regarding the cap – would this issue be regulated by the Green Paper? Or would people still spend countless amounts of money on their social care?

Individual contributions vs taxpayer contributions – there should be a balance between the two. It shouldn’t be the case that if the cap is introduced, the taxpayers would then be required to pay higher taxes, to compensate the income to the health care system.

This issue also seems to be in a need of proper and fair regulation, as currently, it will always be a risk that Local Authorities suspect that someone has deliberately tried to hide their assets towards the total calculation of how much they should pay for their care. There were some cases reported, where for instance regular gifts or a gift for children were perceived as hiding the real state of wealth. Would the Green Paper address the uncertainties around assets that are taken into consideration when applying for social care?

The cost of social care for the self-funders

It seems that self-funders tend to pay higher fees for the same level of service (41% more, on average) because local authorities can negotiate lower fees. Is this fair? Shouldn’t the Government do something about it?

According to the current means-test, the patients with dementia who have assets including their own house over £23,250 must cover the cost of their care. But for many other long-term health conditions (for example cancer or heart disease), the treatment is available for free on the NHS. It just doesn’t seem right that people with dementia should carry the burden of paying for their care, whereas such patients should be in fact protected by the society. It was figured out that the average cost of dementia is £32,250 per year per person, of which two-thirds are being paid by the people with dementia.

Would this problem be addressed by the Green Paper and would dementia be on the list of the diseases financed by the NHS, or would there any other financing scheme be established?

We can’t do anything but wait

There are many other social care issues that need to be carefully considered and included in the forthcoming Green Paper, but nothing is yet known for sure.
But one thing is for sure: the longer the Green Paper takes to be published, the longer the chaos and uncertainty exists in the whole social care sector. Let’s hope it will not take politicians too long to finally produce and publish the Green Paper.

How to talk to a person with dementia